Not Quite Twenty Questions for Gayle Lynds

HANK PHILLIPPI RYAN: Welcome to New England, Gayle Lynds! I knew she was a long time California girl, so I was surprised and delighted to hear she’d moved to town. “Town” meaning Maine, but we’re SinCNE, so hey, we need to swoop her right up, right?

I met her—how long ago, Gayle? When David Morrell asked me to write an article about her book MASQUERADE for inclusion in the ITW anthology of 100 MUST READ THRILLERS. How could I write such a thing without interviewing her? Which I did—and she was fabulous.

We’ve stayed pals—seeing each other, too briefly, at various writing things. But we reconnected at a recent meeting of (insert name of other big mystery group here and that also goes by initials). She’d been invited to speak about her writing process and what she’s learned in her career—wait. You know about her career, right? She pretty much broke the gender barrier in spy novels—when her first book was submitted to an agent, many years ago, she told me, his response was “A woman couldn’t possibly have written this.”

Which is such a great quote now, right? But probably not so much fun at the time. Well, fairly soon after, she showed HIM, right? And is now a multi multi New York Times best-seller.

And now for Not Quite Twenty Questions—for the iconic Gayle Lynds. 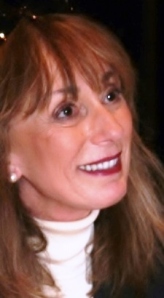 Title of your autobiography?
I Didn’t Know I Wasn’t Supposed to Do It

Why?
Because I really didn’t know I wasn’t supposed to write guy books in a guy field. (Who made the rule that spy novels were guy books????) There are a few other instances like this in my checkered past.

Book you wish you had written?
How to Survive Living with a Writer. Or, I’m Not Ignoring You When My Eyes Glaze Over – I’m Just Planning to Kill Someone (Not You)! [Note: Lesson learned from Marriage #1.]

Movie you would see again and again?
The Godfather

Why?
To me, it’s a glorious, beautifully structured story with unforgettable characters, perceptive cultural insights, thrilling action, and an ironic, bittersweet ending that reveals and echoes. Wow.

When in history would you choose to visit?
The future, say 50 years hence.

Why?
I’m terrified, but curious. The theme of my life.

Pizza or chocolate?
A Mount Everest of chocolate, please.

Kids? Pets?
An assortment of children, like a great box of chocolate. He has three, and I have four, all grown up but amazingly still kids to us. We are lucky.We also blended animals, but with attrition have only two cats left. They’re aging and bossy, just like us.

Hobbies?
I keep working on that.

Garden?
Lots of flowers. I particularly love peonies and lilacs. I couldn’t grow them in Southern California, so am really enjoying being able to grow them here in Maine.

Fear or phobia?
Yes and yes, which is why I write thrillers. Kill the bad guys!

Do you have a recurring dream? What is it?
My two “favorites” – I’m back in college and haven’t studied and can’t find my next class and am sure to fail; and I’m at some terrific party and have forgotten to wear my shoes. Now you know what fills my closet.

Do you watch TV? What?
Absolutely. This is a golden age in television. Currently, we’re watching series like The Americans, Elementary, and Game of Thrones.

Thing you always say to yourself when writing?
What am I really trying to say here?

What are you working on now?
A new international espionage novel (A.K.A.: spy thriller). I’m still in the flailing-around stage, doing research and trying to make sense of my thoughts.

Are you…enjoying it?
When it’s not driving me nuts, yes, very much.I doubt I’ll ever truly understand the process. This much I know – if I don’t do it, the book doesn’t get written, and that would make me sad.

Do you have a motto? (What is it?)
Don’t look back. There are enough problems – and plenty of joys – ahead.

HANK PHILLIPPI RYAN: Wonderful! And here’s some more writing advice from Gayle. She says, when you don’t know what comes next in your book, ask yourself: “What is my villain doing?”

When she mentioned that in her speech last week, I thought—gee. That’s my problem. I don’t know who my villain IS.

So again—welcome, Gayle! What secrets would you reveal to her, Sisters, about New England? 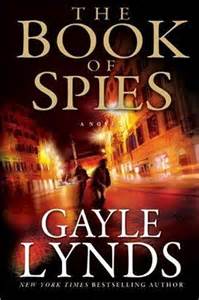 New York Times bestseller GAYLE LYNDS is the award-winning author of ten international espionage novels, including The Book of Spies and The Last Spymaster.  Publishers Weekly lists her book Masquerade among the top ten spy novels of all time.  The London Observer calls her a kick-ass thriller writer.  Lee Child says she’s “today’s best thriller writer.”  Her next book is Game of Assassins, due out in 2015.

With Robert Ludlum, she created the Covert-One series.  The first one, The Hades Factor, was a CBS miniseries.  A member of the Association for Former Intelligence Officers, she is cofounder (with David Morrell) and former copresident of International Thriller Writers, Inc.  In 2011, she married John C. Sheldon and moved from Southern California to Southern Maine, where the moose outnumber the two-legged inhabitants and she’s very happy.  Please visit her at www.GayleLynds.com

HANK PHILLIPPI RYAN is the on-air investigative reporter for Boston’s NBC affiliate. She’s won 30 EMMYs, 12 Edward R. Murrow awards and dozens of other honors for her ground-breaking journalism. A bestselling author of six mystery novels, Ryan has won multiple prestigious awards for her crime fiction: the Agatha, Anthony, Macavity, and for THE OTHER WOMAN, the coveted Mary Higgins Clark Award. National reviews have called her a “master at crafting suspenseful mysteries” and “a superb and gifted storyteller.” Her newest thriller, THE WRONG GIRL, has the extraordinary honor of winning the 2013 Agatha Award for Best Contemporary Novel! A four-week Boston Globe bestseller, it was dubbed “Another winner” in a Booklist starred review and “Stellar” by Library Journal.  She’s on the national board of Mystery Writers of America and 2013 president of national Sisters in Crime. Watch for her next novel, TRUTH BE TOLD, on October 7, 2014.

Lisa Haselton has had several short mystery stories published and has a couple of novels in various stages of completion. She always enjoys learning new tidbits about other writers, and takes great pride as an editor when working with writers on polishing their manuscripts. She's living a life around her passions for writing, photography, volunteering, and anything related to New England, particularly New Hampshire.
View all posts by Lisa Haselton →
This entry was posted in Hank Phillippi Ryan, Interview, Not Quite Twenty Questions and tagged book of spies, gayle lynds, Hank Phillippi Ryan, john c. sheldon, masquerade, mystery, Not Quite Twenty Questions, thriller. Bookmark the permalink.

14 Responses to Not Quite Twenty Questions for Gayle Lynds