Week 9 of a citizen’s police academy

Ah, wonderful Week 9 of citizen’s police academy. I and my fellow students got to learn about drugs and many items related to drugs. There was a lot of show-and-tell of confiscated items.

Such as the digital scale to measure product properly.

A smoking bowl (some of these can be very pretty).

We even got to sample, er, see, some leafy greens. And one lucky student (not me) used a field kit to sample some of this product, which turned out to be marijuana (as the evidence bag said, but we needed to be sure.) 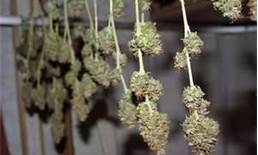 After having some hands-on with drug paraphernalia, the Police Chief started the Drug Investigation part of the evening with this YouTube video depicting the effect of illegal drugs on spiders (and the webs they weave, I love when puns come naturally). Warning: language starts out okay, but gets rough. We (the class and officers in the room) found the video hilarious, but it’s not for everyone.

The Chief and Detectives shared some of their real-world local drug investigation and arrest stories and I found them interesting.

One particular story was: the girlfriend of a guy got fed up with him one last time, told him she was going to the police, and she did. That very minute. She gave the detective all the information needed to start an investigation, and within a few days, the police arrested this man. He lived in a duplex, and his neighbors had no idea that he grew that happy green plant in his unit. We saw a lot of pictures the police had taken of this man’s house, and, while the living space was quite a mess, the room he had dedicated to growing his product contained equipment worth more than the entire home.

This particular guy, turns out, never distributed the product. He simply loved it and grew it for his own personal use. There wasn’t much to charge him on (unfortunately I was caught up in listening to the story and didn’t write down the final outcome), but I know the detective and police chief were not at all happy that the man served little to no jail time.

The main point of the story was how the department gains CIs (confidential informants), and how most times, people just show up and give them details about not-so-good people in the community.

In the story I mentioned, once the woman shared what she knew, the police had to confirm the details. Then they got the search warrant and came up with their plan for serving that warrant without anyone getting hurt.

Another tidbit I learned was about triple-decker houses.

It was yet another fun and educational evening. And I’m still laughing over that spider video.

I haven’t incorporated any drug activity in any of my stories, I’ve hinted at it in one novel, but I will definitely be using the triple-decker insight to add to what I already have.

Thanks for reading. Next week is about the final class and the graduation. Can’t believe 10 weeks is gone already.

Lisa Haselton has had several short mystery stories published and has a couple of novels in various stages of completion. She always enjoys learning new tidbits about other writers, and takes great pride as an editor when working with writers on polishing their manuscripts. She's living a life around her passions for writing, photography, volunteering, and anything related to New England, particularly New Hampshire.
View all posts by Lisa Haselton →
This entry was posted in Event Recap, Lisa Haselton, Of Interest, Writing resources and tagged citizen's police academy, cops, creativity, lisa j. jackson, mysteries, mystery, police academy, police procedure, research, writing. Bookmark the permalink.

2 Responses to Week 9 of a citizen’s police academy