Not Quite Twenty Questions for Barbara Ross

Hank Phillippi Ryan: When Barbara Ross and I met, we didn’t know we were meeting.

(She’s laughing right now, because she knows this story. And it is a GREAT one.)

It was a million years ago… well, seriously, only fifteen. I was taking a class in mystery writing at the Boston Center for Adult Education, and on the last day of classes (I think there were four) we were supposed to read out loud from what we’d written.

I had like, two pages. Introducing like, FIFTEEN characters. It was a disaster, and doesn’t exist anymore.

But there was this other woman, no idea of her name, who read her first two pages, and they were FABULOUS. FABULOUS. So fabulous that they haunted me for the next ten or so years. I thought about them all the time.

I say, happy to. I start reading. IT IS THE SAME BOOK.

That is one of my favorite stories ever.

And here is Barbara now, an Agatha Nominee for Best Novel! And she’s now on her fourth book. Like I said, love it. And I also love her answers to Not Quite Twenty Questions.

Title of your autobiography?
She Had a Good Laugh.

Book you wish you had written?
So, so many books. Can I give you two short stories? “The Woman in the Wardrobe,” by Robert Barnard, which I think is the perfect crime short story, from Death of a Salesperson and Other Untimely Events. And “The Bear Came Over the Mountain,” by Alice Munro. Or almost any story by Alice Munro.

Okay, so now I have to add “Horseman,” by Richard Russo, because it is also perfect.

Movie you would see again and again?
I am a person who will watch movies again and again, like a child gaining comfort from having the same story read over and over. Right now I have watched, more times than I care to admit, Richard Curtis’s time traveler movie, “About Time.” Not a critical success, certainly schlocky, but I absolutely love it. And its score.

Exotic drinks–yes? No?
Yes, preferably in a tropical climate. In Key West where we spend time every winter, you can get a pitcher of margaritas “to go,” which blows these New Englanders’ minds.

When in history would you choose to visit?
From just before the American Revolution through the ratification of the Constitution. Okay, I know that’s 20+ years. But I think this is one of those times in history when not one extraordinary person, but a confluence of extraordinary people came together to do something so amazing it still takes my breath away.

If I can’t do that, I’d like to go see Shakespeare work with his actors at the Globe.

What are you working on now?
The third book in the Maine Clambake Mystery series, Musseled Out, which is, er was, due June 1.

Spouse?
The amazing and supportive Bill Carito. And I say that not only because he develops all the recipes for the Maine Clambake Mysteries and I am currently on a deadline, though that certainly doesn’t hurt.

Will you ever look at a clambake the same way?
I guess not. If I’m at a clambake, I’ll always, on some level, be doing research. That’s always the risk when you turn something you love into work, which is why I thought long and hard about whether I wanted to be a working writer with deadlines and contracts and stuff. (Of course, in the end, I decided that I did.) 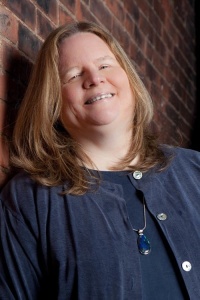 So, clams aside. Pizza or chocolate?
One needs both salty and sweet, no?

Hobbies?
I seem to have elevated my former hobby of writing to my profession, so what does that leave? I have been quite a dedicated scrapbooker, though my supplier went bankrupt and that has left me bereft. The pieces of our January 2013 Cuba trip are still all over my desk. Plus I seem to be the only person in the world who doesn’t want to scrapbook digitally. But when you spend all day staring at a computer…

Garden?
Used to, though not very well. Now I just look.

Kids?
Two, a son and daughter, the son in his thirties and the daughter soon to be. Both excellent writers, by the way, though my son channels most of his creativity into creating video games as a hobby nowadays. Plus a wonderful daughter-in-law, an editor of audiobooks with a library degree (sense a theme?), and a fabulous one-year-old granddaughter.

Pets?
Not currently. I had a mutt growing up, and a golden and then a rescue cocker as we were raising our family. I do miss having a dog, but with no kids at home, I also like being able to lock to door and wander off.

Fear or phobia?
The phone. Oh, how I hate, fear, avoid the telephone. It’s plagued me all my life. It’s terrible when your own kids know they’ll be the ones calling for pizza.

Thing you always say to yourself when writing?
“The only way to it is through it.”

Do you watch TV? What?
Yes. Love TV. I’m convinced if Dickens were alive now he’d be writing for HBO. This last season I’ve watched Mad Men, The Good Wife, Elementary, True Detective, Sherlock, Broadchurch, The Bletchly Circle. I could go on and on (and I have). Right now Bill and I are obsessed with Orphan Black.

Can you sing?
Kind of. I sang O Holy Night as a solo in sixth grade chorus. But I rarely get the opportunity.

Best concert you’ve ever seen?
Tanglewood, on the lawn with my parents, Bill, my kids, friends, assorted sister and brother-in-laws and the kid’s cousins. It poured beforehand, but the skies cleared just in time and the stars came out. I have no idea what we heard. It was about family, friends, great food and wine.

Secret talent?
I can get more dishes in a dishwasher than anyone you know. It is my superpower.

Oh, very impressive! And practical. Do you have a motto? (What is it?)
“It is never too late to be what you might have been.” Which is most often attributed to George Eliot, though apparently no one can find the work it appears in.

Ever have a recurring dream or nightmare?
The most common one where you are in a familiar town driving on familiar streets and you go over a bridge and it’s a whole new place you’ve never been.

WHOA. I have never had that dream, and I have never heard of it. I love it, though. To me, it is very positive, and confident, and full of adventure.

What do you think that means?
Something about leaving the comfortable for the unknown, maybe? Just lately, I’ve been having dreams with intense physical effects. Like I was in a car with three businessmen I’d just met and we drove up over a roller coaster that was built for cars and I could feel the car dropping, dropping in my stomach. What is that about?

P.S. Cars aren’t really that prominent. I don’t know why both my examples are cars.

So funny, because there’s the not-so-confident part. (Do the businessmen look like your publisher and agent? Kidding.) What do you wish someone had told you?
Honey, it will all be okay.

Yup. That works for dreams, and for real life, too.

So Readers, let’s talk about—clambakes! Ever been to one? Or wanted to? And we’ll award a Barb Ross book to one lucky commenter!

Barbara Ross is the author of the Maine Clambake Mystery series. The most recent book, Boiled Over, was published in May 2014. The first, Clammed Up, was nominated for an Agatha Award for Best Contemporary Novel and the RT Book Reviews, Reviewer’s Choice Best Book Award for Amateur Sleuth, and was a finalist for the Maine Literary Award for Crime Fiction.

Barbara is a co-editor/co-publisher at Level Best Books, which produces an award-winning anthology of crime and mystery stories by New England authors every November. “Bread Baby” in Best New England Crime Stories 2014: Stone Cold was nominated for an Agatha Award for Best Short Story. Barbara also blogs with a wonderful group of Maine mystery authors at Maine Crime Writers and with a group of writers of New England-based cozy mysteries at Wicked Cozy Authors.

Barbara’s first mystery novel, The Death of an Ambitious Woman, was published by Five Star/Gale/Cengage in August, 2010. In her former life, Barbara was a co-founder and Chief Operating Officer of two successful start-ups in educational technology.

HANK PHILLIPPI RYAN is the on-air investigative reporter for Boston’s NBC affiliate. She’s won 30 EMMYs, 12 Edward R. Murrow awards and dozens of other honors for her ground-breaking journalism. A bestselling author of six mystery novels, Ryan has won multiple prestigious awards for her crime fiction: the Agatha, Anthony, Macavity, and for THE OTHER WOMAN, the coveted Mary Higgins Clark Award. National reviews have called her a “master at crafting suspenseful mysteries” and “a superb and gifted storyteller.” Her newest thriller, THE WRONG GIRL, has the extraordinary honor of winning the 2013 Agatha Award for Best Contemporary Novel! A four-week Boston Globe bestseller, it was dubbed “Another winner” in a Booklist starred review and “Stellar” by Library Journal.  She’s on the national board of Mystery Writers of America and 2013 president of national Sisters in Crime. Watch for her next novel, TRUTH BE TOLD, on October 7, 2014.

Lisa Haselton has had several short mystery stories published and has a couple of novels in various stages of completion. She always enjoys learning new tidbits about other writers, and takes great pride as an editor when working with writers on polishing their manuscripts. She's living a life around her passions for writing, photography, volunteering, and anything related to New England, particularly New Hampshire.
View all posts by Lisa Haselton →
This entry was posted in Barbara Ross, Hank Phillippi Ryan, Interview, Not Quite Twenty Questions and tagged barbara ross, Hank Phillippi Ryan, Not Quite Twenty Questions. Bookmark the permalink.

26 Responses to Not Quite Twenty Questions for Barbara Ross