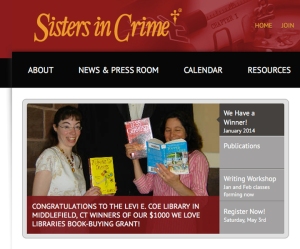 On Wednesday, February 19, the Levi E. Coe Library in Middlefield, learned they had won the Sisters in Crime “We Love Libraries” monthly drawing. Julie Hennrikus emailed Connecticut members that night and by Friday morning, a team of three had volunteered to present the $1000 check: Rhonda Lane of Southington; Jane Haertel writing as Susannah Hardy of far-away Enfield; and Meriden native, Kathy Orzech. By Friday’s end, a date for the presentation was set and Andrea Smith, national SinC Liaison for this program, had notified library staff.

When Kathy heard the news she said, “With a population of less than 4500, who knew Middlefield even had a library, yet, the Levi E. Coe Library has been serving residents since 1893. I find that astonishing. Even in good financial times, a $1000 for books would be a windfall for any library. I’m so happy to have a winner right in my backyard. It made me think of The Little Library That Could.” A feel-good story with local connections to a national organization of mystery writers was sure to entice the media, so she wrote a press release: Middlefield’s Small Library Wins Big, ran it by the others, and sent it late Sunday night to three area newspapers and three TV stations. “My work is done.” But the thought hit: Now that we’ve invited media, does anyone actually have a check? A speech? A plan? “Not me,” Kathy said, and Jane echoed the sentiment, “I got nuttin’.”

Sunday afternoon, Rhonda contacted Julie and Andrea. No check. But no worries, there was a whole day and night to prepare an oversized the-check’s-in-the-mail check to present. With the full support of her Sisters, Rhonda and her husband, Rod, accepted the impossible task and within an impossible deadline, produced a work of art.

On a cold Tuesday morning, Rhonda, Jane and Kathy headed to the library. As the first arrival, Kathy was greeted and given a tour by Children’s Librarian Vicki Berry. 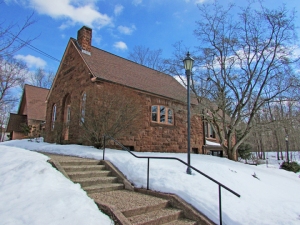 Judge Levi Coe donated the library building, contents and the land to the townspeople of Middlefield on June 6, 1893. Originally open Saturdays from 2:00 to 4:30pm, the librarian was paid $1 per month, and when hours were extended to include Wednesdays from 1:30 to 4:30, the salary doubled. The janitor was paid 50 cents each time he started a fire in the old pot-bellied stove. Coe also donated books from his personal collection and each year until his death spent $100 on the purchase of new books; the state of Connecticut made a matching gift. By 1904 the library’s collection consisted of nearly 300 books. 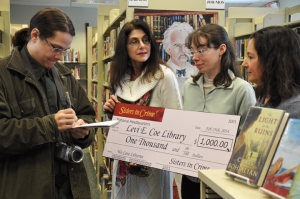 The Meriden Record-Journal sent Berlin Citizen reporter Charles Kreutzkamp to cover the event for its Middlefield-area weekly publication, Town Times. He interviewed Sisters in Crime members and the library staff, and shot photos.

Rhonda said a few words and presented the “check” to Loren, Susan and Vicki, while Bonny Fowler from the library’s Board of Directors shot photos.

The library staff repeatedly stated how very grateful they were to Sisters in Crime and how much the new books will mean to them. They will be sitting down as a group to choose titles. Loren said they’ve known about Sisters in Crime and praised speaker Roberta Isleib for a past presentation.

Library staff said when they first learned they had won, it was announced around the library and everyone—staff, readers, visitors, kids and parents—were so happy they cheered.

After more socializing, press interviews and photos, the check was tacked on the wall of the circulation desk for all to see—and there it remains.

Immediately following the event, Rhonda, Jane and Kathy met at Lyman Orchards, just down the road a piece, where they split a chicken salad sandwich and reveled in pulling off a successful Connecticut Sisters in Crime New England event.

Here is the Town Times article!

Here is The Middletown Press article!

Kathryn Orzech is the author of psychic thriller PREMONITION OF TERROR, inspired by her website, Dreamwatch.com, true paranormal experiences of ordinary people, online with worldwide reach for 15 years. Release of her suspense family saga ASYLUM is planned for Spring 2014. Kathryn is a seasoned world traveler and news junkie with interests in geopolitics, culture and science.

As Julia Henry, she writes the Garden Squad series for Kensington. PRUNING THE DEAD debuts the series in February 2019. As J.A. Hennrikus, she writes the Theater Cop series for Midnight Ink. Next up: WITH A KISS I DIE, April 2019. As Julianne Holmes she wrote the Clock Shop Mystery series for Berkley. She tweets her writing life as @JHAuthors, and her other life as @JulieHennrikus. She is on Instagram as @JHAuthors. Her website is jhauthors.com, and she blogs with WickedAuthors.com and KillerCharacters.com.
View all posts by JH Authors →
This entry was posted in Awards, Libraries, Of Interest, Uncategorized and tagged Libraries, Sisters In Crime New England. Bookmark the permalink.