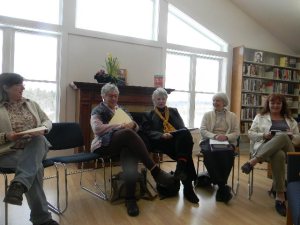 It’s tough these days to get anyone together for anything.

All the conveniences we have are supposed to make things so much easier, but it seems like it just causes people to put more on their plate.

So when Sisters in Crime tries to get mystery writers across New England to gather for a two-hour session of reading and talking writing, it’s really a miracle anyone — most of whom have “day jobs” — can make it.

Anyone who focused on turnout, either by members or audience, for the past weekend’s events in Massachusetts, Maine, Connecticut, New Hampshire and honorary New England sister New York may have thought the weekend was a disappointment.

But those who attended know different.

Writing, as we say and are told countless times, is a solitary experience. It can be crazy-making. But getting together to talk to, and listen to, other writers is a validating and affirming experience.

A few writers at Maine’s event Saturday also remarked they had never read their work to an audience before and found it empowering.
The Maine group decided we should get together more often to talk about writing, socialize and share ideas.

Conversation, food, affirmation, empowerment. Once again, the Murder by the Minute weekend was a resounding success.

Maureen Milliken is the author of the Bernie O’Dea mystery series. Follow her on Twitter at @mmilliken47 and like her Facebook page at Maureen Milliken mysteries. Sign up for email updates at maureenmilliken.com. She hosts the podcast Crime&Stuff with her sister Rebecca Milliken.
View all posts by Maureen Milliken →
This entry was posted in Craft, Members, Of Interest, Readers, SinCNE, Uncategorized, Writers, Writing. Bookmark the permalink.